Windsor, ON and Taylor, MI – Each year on March 14, International Day of Action for Rivers recognizes and celebrates efforts made around the world to protect and restore rivers. Globally, rivers often share boundaries with numerous jurisdictions, and this day highlights the shared goal of strengthening regional and international networks who steward these resources.

The Detroit River has served an important role in the history of the Windsor-Detroit area and is one of the busiest waterways in the world. It connects Lakes Superior, Michigan, and Huron to Lakes Erie, Ontario and the St. Lawrence Seaway. It is also designated as an American Heritage River and a Canadian Heritage River, the only river in North America to have this dual designation.

When the Windsor-Detroit area underwent rapid industrialization at the turn of the 20th century, the Detroit River became notoriously polluted. Years of extensive industrial, urban, and agricultural development along the Detroit River resulted in the historical release of harmful legacy pollutants from industry, bacteria from wastewater treatment plants, and nutrients from agricultural runoff. These environmental issues have caused the impairment of several beneficial uses. As part of the international cleanup effort, the Great Lakes Water Quality Agreement (GLWQA) was signed between Canada and the United States in 1972, committing both countries to protect and restore the Great Lakes Ecosystem. The Detroit River was designated as an Area of Concern (AOC), which are regarded as the most environmentally degraded sites within the Great Lakes. The 1970s and 1980s saw the development of a massive conservation effort aimed at cleaning up the Detroit River.

Both the Detroit River Canadian Cleanup (DRCC) and the Friends of the Detroit River (FDR) implement separate Remedial Action Plans (RAP) for Canada and the United States. Through community-based partnership between the government (federal, provincial/state, municipal), local industries, researchers, environmental organizations, and citizens working together, the goal is to protect, restore, and enhance the Detroit River ecosystem.

Remediation efforts from both Canada and the United States in the Detroit River include sediment cleanup and remediation, habitat restoration, municipal and industrial wastewater treatment, infrastructure upgrades, non-point source pollution management, as well as a suite of ongoing studies, investigations, monitoring, research, education and outreach.

March 21st 2017: International Joint Commission public meeting held at the Outdoor Adventure Centre, 1801 Atwater, Detroit, Michigan from 6pm to 9pm. The draft Triennial Assessment of Progress (TAP) report under the 2012 Great Lakes Water Quality Agreement, the International Joint Commission commends Canada and the United States was released January 2017 to obtain public input until April 15th 2017. All comments regarding the draft TAP report as well as the two countries’ progress report can be sent to ParticipateIJC@ottawa.ijc.org and online at www.participateIJC.org.

March 22nd 2017: World Water Day and the DRCC Film Screening of ‘What Lies Below’ documentary (www.detroitriver.ca/movie).

April 23rd 2017: Celebrate Earth Day by tree planting with the DRCC and the Essex Region Conservation Authority. Also, stop on by Malden Park to visit the City of Windsor’s event! (http://detroitriver.ca/celebrate-earth-day-in-the-windsor-essex-community/).

The Detroit River Canadian Cleanup implements the Remedial Action Plan on behalf of a community-based partnership working together to protect, restore and enhance the Detroit River ecosystem. The federal, provincial and municipal government, local industries, scientific researchers, local environmental organizations and many dedicated citizens are key partners and play an important role in the cleanup process. The DRCC’s member organizations provide leadership in identifying partnerships and funding opportunities to support and implement clean up goals.

Friends of the Detroit River

The mission of Friends of the Detroit River is to enhance the environmental, educational, economic, cultural and recreational opportunities associated with the Detroit River watershed through citizen involvement and community action. 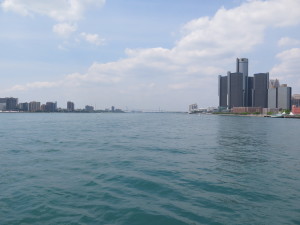 Coming up next weekend, hope to see you at Shiver on the River! We're at the Belle Isle Casino from 10am to 3pm. Come learn about the Detroit River and stay to meet some great organizations working to protect, enhance and restore it 🌊 ... See MoreSee Less

Shiver on the River coming to Detroit's Belle Isle on Feb. 1