Activities such as construction of the shipping channel, the dumping of dredge spoils, the hardening of shoreline, and the destruction of shallow wetlands have resulted in a loss of over 95% of the Detroit River’s coastal wetlands. The protection and restoration of existing coastal wetland and aquatic habitat is a priority for the Detroit River Canadian Cleanup partnership. For more information, please visit our Annual Review (yearly reports) and DRCC Publications pages.

View our story map to learn more about our projects 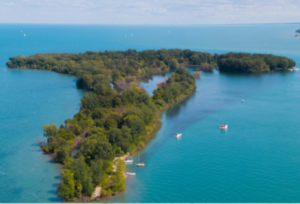 In collaboration with the Essex Region Conservation Authority (ERCA), City staff oversaw the creation of natural barriers, in the form of nine sheltering islands and a 600-metre revetment wall, installed in the water along the north and northeast sides of the island aimed at preventing erosion damage and enhancing fish habitat.

Due to strong river currents and heavy wave action from freighters, Peche Island has decreased in area by nearly 17 acres since 1931. Erosion control measures were taken where over 5,605 tonnes of stone and rock were laid along the northeast shoreline to create a 600-metre-long revetment wall, and over 11,785 tonnes of stone and rock were expertly placed on the north side of Peche Island to construct nine offshore sheltering islands, each measuring 50 metres in length. The primary purpose is for erosion control, where the sheltering islands also provide enhancement of fish habitat, particularly for the species-at-risk Northern Madtom.

The project cost approximately $4.5 million and was paid for by a partnership of City, ERCA, and various funding sources.

“Peche Island is a treasure for our city and region. This work is going to help ensure the island remains a recreation destination and protected environmental habitat for generations to come.” – Windsor Mayor Drew Dilkens

“This project is a tremendous example of how all three levels of government can work together to solve shoreline erosion issues and build aquatic habitat at the same time. The project will mitigate the loss of further land on Pêche Island, which will also help with local water quality by reducing soil erosion. We are already seeing the positive effects of the habitat features built with the submerged aquatic vegetation beginning to grow and mature.” – ERCA Director of Conservation Services Kevin Money 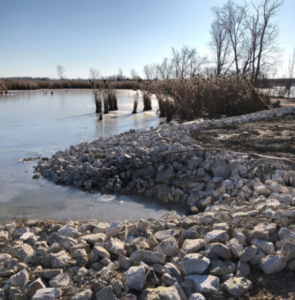 Progress was made on restoring the Collavino wetland at the mouth of the Canard River. The Collavino wetland is 30.3 ha (75 acres) in size and has been designated as a Provincially Significant Wetland. In 2019, with funding support from ECCC, ERCA repaired the existing dyke and installed pumping infrastructure and water level control structures to manipulate water levels on the inside of the dyke. In 2021, the water levels were drawn down in the marsh to prepare for a prescribed burn to remove invasive Phragmites australis to enhance the wetland habitat for marsh birds and other wildlife. The prescribed burn took place in March 2022, successfully burning the dense Phragmites in the wetland. The plan is to flood the cell in the coming months to ensure the Phragmites does not return. Next year, the water levels will be drawn down to expose the native aquatic plant seedbed such as Arrowheads, Swamp rose mallow and common cattail, which is expected to increase native plant presence within the wetlands to improve habitat use by birds and other wildlife. 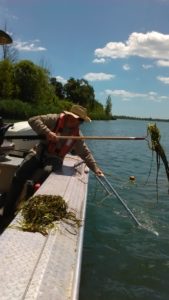 The DRCC Habitat Work Group, which is comprised of federal, provincial, local experts, and university researchers, has been working towards prioritizing areas in the Detroit River for potential fish habitat restoration projects. Many of these potential restoration actions include installing breakwaters to create slow water areas in order to encourage the establishment of vegetation, which makes good nursery habitat for young fish of many species.

Field researchers were on the river in July and August 2015 collecting data about fish communities, vegetation, sediment, and water quality at 22 of  the potential restoration sites. DRCC partners then engaged an engineering consultant to more closely evaluate the feasibility of several of these projects. 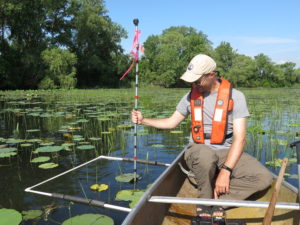 Since 2011, researchers have monitored coastal wetland habitat and marsh bird populations at selected sites in the Detroit River. By understanding populations of marsh birds and potential factors that affect marsh bird scores, the DRCC can assess the fish and wildlife populations and loss of wildlife habitat beneficial uses. Researchers collect data on water quality, submerged aquatic vegetation, aquatic macroinvertebrates and breeding marsh bird communities. Monitoring continued in the summer 2021 at seven wetlands on the Detroit River including MMM Hunt Club, Collavino and the 5 core sites. The research team completed data entry and is analyzing Indices of Biotic Integrity (IBIs).

IBIs are used to assess the habitat condition of wetland and nearshore areas in the Detroit River. These indices integrate complex ecological or community data into a single metric or score that can be tracked and understood. Previous results indicate that marsh bird IBI scores for Detroit River wetlands are low and the Canadian Wildlife Services (CWS) and Birds Canada are currently trying to determine reasons for the low marsh bird scores so that restoration actions can be implemented. The marsh bird scores overtime will be used to assist with the final evaluation of the Loss of Fish and Wildlife Habitat  BUI #14. 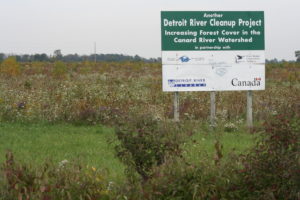 Since 2000, a total of 441 hectares (1,092 acres) of land has been restored in the Detroit River watershed through this program!All project decisions were guided by the priorities outlined in the Essex Region Natural Heritage System Strategy (ERNHSS) and are consistent with the habitat priorities of the Detroit River Remedial Action Plan (RAP). 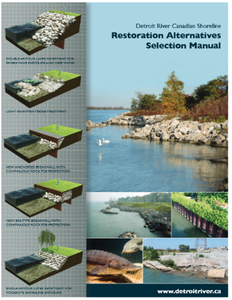 A manual was created to guide shoreline restoration efforts for private landowners working within the Detroit River AOC, and to assist the DRCC partnership in determining the suitability of various sites for implementing fish habitat enhancement works. The manual describes the various options for shoreline restoration that are possible along the Canadian side of the Detroit River for different project types. As well, it offers an easy-to-follow decision making matrix to help guide landowners, contractors, and the technical staff of various approving agencies to choose the best shoreline solution for a given site, based on common site characteristics.

Additionally, in 2016, the Shoreline Design Manual was updated to include a decision matrix and a map to help landowners decide which fish-friendly shoreline erosion protection techniques is best for them.

Shoreline hardening has resulted in the direct loss and fragmentation of natural habitat along the Detroit River shoreline – replacing it with reclaimed parkland, industrial land, housing, and other artificial structures such as seawalls. Most of this shoreline hardening along the Detroit River is considered unsuitable for many desirable species. In response to this, “soft” shoreline treatment techniques have become more prevalent in recent years, and involve the use of rock (and other natural materials) in combination with plants to resist erosion. Soft shoreline treatments more closely mimic the naturally occurring foreshores on the Great Lakes, and in doing so, provide greater environmental value. To date, the DRCC has conducted 14 shoreline habitat projects (summarized in Table below).

1 This project took place on the Canard River, a tributary of the Detroit River. 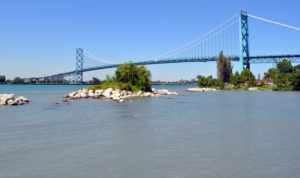 The Detroit River is home for over 65 species of fish. In the winter of 2003/04, a number of improvements were made to the McKee Park shoreline to improve fish habitat. This included construction of large rock islands to protect the shoreline and create an embayment from the high-energy Detroit River water flow. A submerged reef was placed offshore for spawning by lake sturgeon and other fish species. Sheltering islands provide a low energy area sheltered from waves and boat wakes for fish to rest and feed. Sand and rounded stone (cobble) placed around these islands provide a living space for aquatic invertebrates that in turn provide food for fish. A sand shoreline of sand and cobble (rounded stones) was added to provide a recreational feature as well as a place for fish, in particular young Lake Sturgeon, to rest and feed. Partners on this project included the Essex Region Conservation Authority, Ontario Great Lakes Renewal Foundation, the City of Windsor, The Windsor Port Authority, the Environment and Climate Change Canada and the Great Lakes Sustainability Fund, Brighton Beach Power, ATCO Power and Ontario Power Generation.

Restoring Habitat for our River Giant 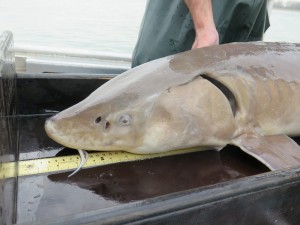 As part of this project, a total of 2.1 acres (0.89 acres in 2008 and 1.2 acres in 2013) of aquatic, deep water habitat was restored on the northeast tip of Fighting Island in the Detroit River. The first stage of the project (2008) constructed a boulder field and 12 individual reefs made up of four different rock types. The expansion phase of this project (2013) constructed one reef bed made up of one type of stone (6-12 inch limestone).

This project is an excellent example of binational collaboration, partnership, and stewardship of shared resources. The success of this fish habitat restoration strategy will help strengthen and improve the fishery in the Detroit River and the entire Great Lakes. Credit for this successful project is owed to many project partners including Environment and Climate Change Canada’s Great Lakes Sustainability Fund, Ontario Ministry of Natural Resources and Forestry, the Ontario Species at Risk Stewardship Fund, DTE Energy, U.S. Fish and Wildlife Service, U.S. Geological Survey, University of Michigan Water Center, and the Great Lakes Restoration Initiative. 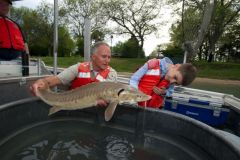 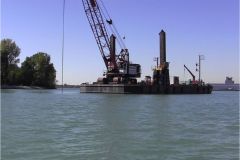 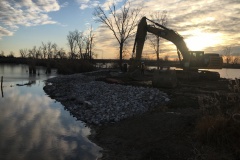 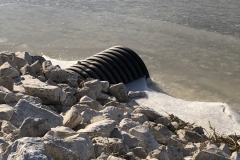 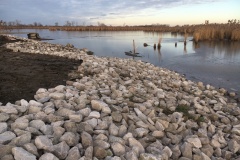 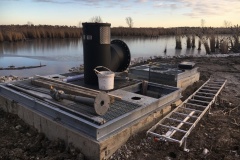 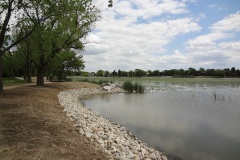 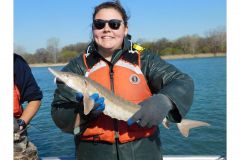 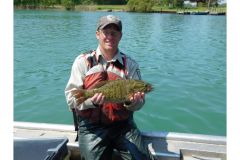 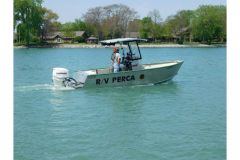 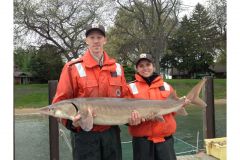 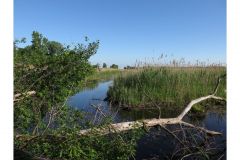 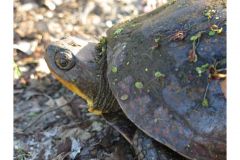 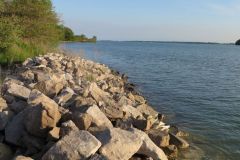 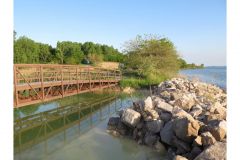 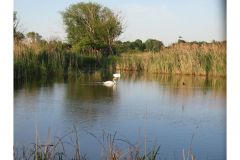 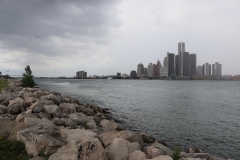 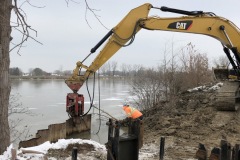 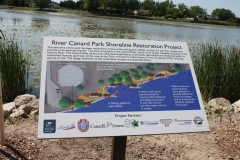 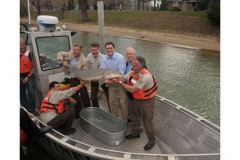 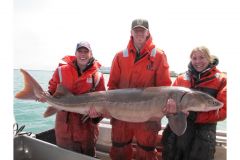 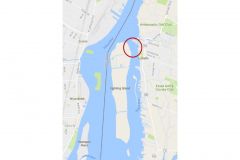