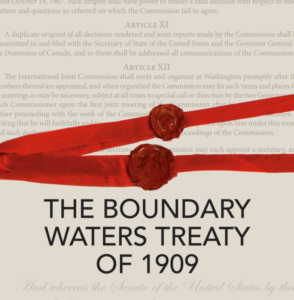 The Boundary Waters Treaty was signed in 1909 to prevent and resolve disputes over the use of the waters shared by Canada and the United States and to settle other transboundary issues. The treaty established the International Joint Commission (IJC) to help the two countries carry out its provisions. At the time, disputes over water were already creating tension along the border. Settlers in Montana and Alberta were building competing canals to divert the waters of the St. Mary and Milk Rivers for their own use. On the Niagara River, it was increasingly clear that the two countries needed a management plan that could balance the growing demand for hydroelectric power with the interests of navigation, while safeguarding the unique natural beauty of Niagara Falls. The treaty provided a framework to deal with these disputes. The IJC held its first meeting in 1912 and has worked to resolve more than 100 matters raised by the two federal governments. Source: IJC

2019 Progress of the Parties Report 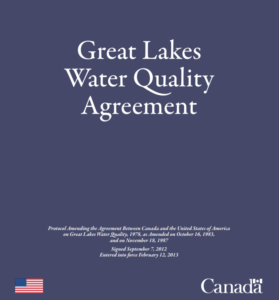 The Great Lakes are shared by Canada and the United States and are vital to the well-being of millions of people. Among other things, they:

The Great Lakes Water Quality Agreement (GLWQA) between Canada and the United States was first signed in 1972. It identifies shared priorities and actions needed to restore and protect the Great Lakes.

The Agreement was modernized in 2012 to reflect new knowledge and tackle all issues affecting Great Lakes water quality and ecosystem health.

The 2012 Canada-United States GLWQA commits the governments of Canada and the United States to restore and protect the Great Lakes to achieve a series of objectives including: being a source of safe, high-quality drinking water; allowing for swimming and other recreational use, unrestricted by environmental quality concerns; allowing for human consumption of fish and wildlife unrestricted by concerns due to harmful pollutants. Source: Environment Canada 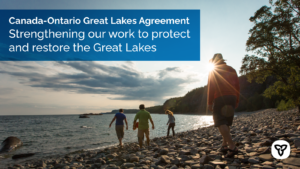 In 2021, the Canadian federal government and the Ontario provincial government signed the 9th Canada-Ontario agreement marking 50 years of collaboration! The Canada-Ontario Agreement (COA) is the federal-provincial agreement that supports the restoration and protection of the Great Lakes Basin Ecosystem. The Agreement between the governments of Canada and Ontario outlines how the two governments will cooperate and coordinate their efforts to restore, protect and conserve the Great Lakes basin ecosystem. It builds on the actions taken through previous agreements, and focuses priorities for future actions. The Agreement also contributes to meeting Canada’s obligations under the Canada-United States Great Lakes Water Quality Agreement (GLWQA). Source: Ontario Ministry of Environment, Conservation, and Parks

The Letter of Commitment regarding the Four Agency Framework (“the Framework”), signed in April 1998, is an agreement of the following four agencies: the U.S. Environmental Protection Agency, Environment Canada, the Michigan Department of Environmental Quality, and the Ontario Ministry of Environment. The Framework facilitates cooperation through a binational program focused on AOCs shared by Ontario and Michigan in the connecting channels of the St. Marys, Detroit and St. Clair Rivers.

The major accomplishment by February 2000 has been the development of position papers on the four major components of the Framework: administration, binational delisting, public involvement and outreach, and progress reporting. The papers focus more on reporting and administrative processes than on cooperative priority setting and remedial action. Also, it is unclear from the papers what mechanisms will be used to coordinate Canadian and U.S. remedial efforts on the Detroit River. However, the Parties are reporting increased collaboration particularly with respect to flow modelling. They are putting in place complementary structures on both sides of the Detroit River to assist coordination and facilitate teamwork.

The Framework emphasizes restoration and the delisting of AOCs. The position papers concentrate on “delisting criteria” or “benchmarks used to assess the progress toward restoration of use impairments” (Environment Canada, Michigan Department of Environmental Quality, Ontario Ministry of Environment, and U.S. Environmental Protection Agency 1998a). The Commission’s understanding is that the term “delisting” is used when an area is no longer designated an Area of Concern because all the beneficial uses are restored. Although the Commission agrees that every opportunity should be taken to recognize milestones and to celebrate accomplishments it believes that the overall goal of restoring beneficial uses should always be paramount. Any confusion regarding the term “delisting” carries the risk that the emphasis will appear to be directed more to the removal of a label than to restoration. The use of the term “restoration criteria” might clarify the issue and avoid this problem.

The Parties have committed to producing reports on each RAP every two years (Environment Canada, Michigan Department of Environmental Quality, Ontario Ministry of Environment, and U.S. Environmental Protection Agency 1998b). It has taken two years to draft the position papers. Devoting more resources to these AOCs will ensure that such biennial reports will not be developed at the expense of programs that address the salient issues in the Areas of Concern. The Parties have recently stated that additional resources have been provided to implement the RAPs. The Commission encourages the Parties to issue the Detroit River and St. Clair River reports simultaneously to aid in coordinating the restoration of the connecting channels from Lake Huron to Lake Erie.

Another component of the Framework is public involvement and outreach activities. In the status assessment of the St. Marys AOC and the Detroit River AOC, the Commission concluded that inadequate consultation with citizens is an obstacle to progress in these two areas (IJC 1997; IJC 1998). The Parties’ commitment to provide financial and in-kind support for a set of core binational public involvement activities may go a long way toward overcoming some of the problems of public involvement that historically have troubled these AOCs. Source: IJC