Reflections on the 20th Anniversary of the Canadian Heritage River Designation: An Interview with Dr. John Hartig

Can you describe what you did in your role as the River Navigator for the Greater Detroit American Heritage River Initiative?

Dr. Hartig: Most people would think that a River Navigator had a boat, but I did not have one. My job was to navigate bureaucracies and deliver projects that would improve quality of life and promote sustainable development. I was charged to form partnerships among communities, businesses, and nongovernmental organizations that would protect the environment, revitalize local economies, and celebrate history and culture.

What projects and initiatives were you able to implement on the river through being the River Navigator and what impact did these have on the river?

Dr. Hartig: There were five priorities of the Greater Detroit American Heritage River Initiative: soft shoreline engineering, linked riverfront greenways, Belle Isle, cleanup of a waterfront brownfield site, and Historic Fort Wayne. Over a 15-year period, 53 soft shoreline projects were implemented on both sides of the border. A good example of linked riverfront greenways is the 9-km Detroit RiverWalk that is now 80% complete. The RiverWalk attracts more than three million annual visitors and has spurred more than $1 billion of public and private investments on adjacent lands in the first ten years. In 2021, the Detroit RiverWalk was named the No. 1 riverwalk in the United States by USA Today. And Windsor’s and Detroit’s greenways will be connected in 2024 with a dedicated bicycle and pedestrian lane on the new Gordie Howe International Bridge. An industrial brownfield site in Trenton was cleaned up and habitats restored to become the Refuge Gateway of the Detroit River International Wildlife Refuge that is now open to the public.

Why are the Canadian and American Heritage River designations important for the river? 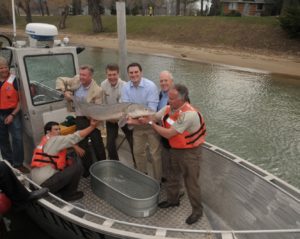 Celebrating the return of Lake Sturgeon at the Fighting Island reef project – a joint Canadian and American habitat restoration project.

The Detroit River is home to the only International Wildlife Refuge in North America. You were the Refuge Manager for 14 years. What should people know about the Refuge? 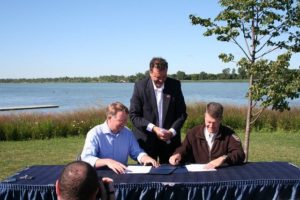 Can you tell us about some of the work you’re currently doing as a Visiting Scholar at the Great Lakes Institute for Environmental Research (GLIER) at the University of Windsor?

Dr. Hartig: I am just completing a four-year project that has identified what has been achieved and learned from more than 35 years of restoring Great Lakes Areas of Concern. I am also excited to be part of the team organizing the 2021 State of the Strait Conference at University of Michigan-Dearborn on Dec. 2, 2021. The focus of the conference will be contaminated sediment remediation. I am also working with another team of scientists on organizing a conference on the ecosystem approach in the 21st century to be held at the University of Windsor in 2022 in celebration of 50th anniversary of the Canada-U.S. Great Lakes Water Quality Agreement.

It is such a privilege and pleasure to be a Visiting Scholar at the Great Lakes Institute for Environmental Research and to foster transboundary partnerships for ecosystem-based management of our Great Lakes. And thank you, partners of Detroit River Canadian Cleanup, for all you do to care for the place we call home.